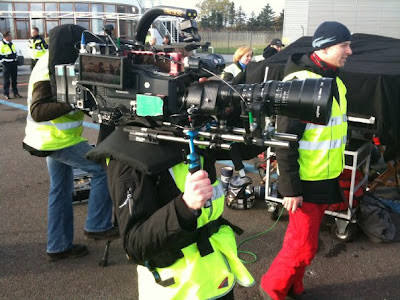 Hans Fabian Wullenweber (red)
Here's a little film update. As many of you know there is a feature film being made about my art and life by Danish director, Hans Fabian Wullenweber. He and I have been working quite intensely most of this winter on the "treatment" for the film, which for those who don't know, is something close to the actual screen play. Besides being creative and fun, it has also been quite a bit of work for me. It feels, at times, like the equivalent of writing another book.

Fabian has been making some amazing connections in the film industry recently, mostly through associations involving previous films and, more recently, by directing the Danish and BBC TV series, "The Killing."
He feels his recent connections will benefit our film project. In a week or so Fabian heads to London to work with Denmark's best establish international producer Vibeke Vindeløv and Stephen Spielberg's casting agent, Joyce Nettles on another little project. Fabian's colleagues, some of whom have expressed interest in the project, have sent me, more than once, running to the internet to find out who some of the people he knows are.
I will continue working on the treatment while he is away, filling in the gaps to my story that have been requested of me. Basically, things are coming along well even though the complexity of the film process feels overwhelming when I stop and think about all the pieces that somehow have to come together.
Just doing my small part on the treatment has been a great learning curve for me. More than anything else, it's about putting one foot in front of the other, writing what needs to be written, saying what needs to be said, drawing inspiration from aspects of some of the more interesting films I have seen. My tendency is to focus completely on the project at hand and let everything else go for a while, which is certainly what I have done to fully give myself to the film project.
Another magical event around the film has been reconnecting, in a more sane way, with my high school sweetheart, Sharon Walsh. We had been in touch for several years and recently I asked her a few questions about that time in our lives for the film. The inquiry initiated a most amazing series of conversations and revealed a golden thread that somehow, in our youthful folly, we had both overlooked. It is always a sweet and sad gift to have one of our blind spots revealed to us. 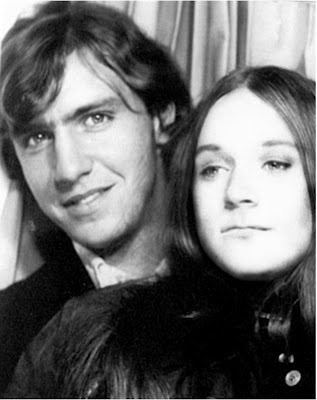 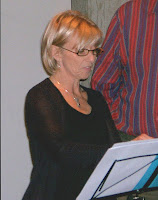 If there was an odd little planet
skirting the earth where inhabitants
were in no mood for hurry, and who's eyes
lingered with a kind of ease.
I would say, Ah! ...that is where you are from.
To give a name to this monastery in the sky
we would call it anything but pedestrian
or fathomable, especially for the industrially inclined
or those whose survival
is commercial and agenda.
This breed of monk, confrontational
and determined to find the feet of clay,
the place of panic,
before a soul is lost
to sleep or hysteria.
There is a kitchen and a lot
happens there, bread casseroles
and conversation
for its potential to
change the status quo.


I suspect others from this planet
are not jolly and
pot-bellied either
they can do without,
though it is pleasing that
you are capable of
extreme glamour
a hot little red sports car
similar to the one Marilyn Monroe
cruised the neighborhood!
Judith reading her poems
Including a couple about the headstone Jerry made
(below)
www.judithadamscustompoetry.com

HAND CARVED HEADSTONE
In 2010 I hand carved, in 16th/17th century New England style, a headstone for Marilyn and I. I then placed it on our cemetery plot in the green burial section of the Langley Woodman cemetery on Whidbey Island. 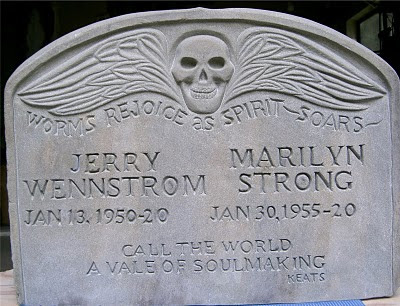 As you can see, spaces were left following the the dates of death 20_ _ It’s a pretty sure bet that we will die 2,000-something.
We were at the Langley Cemetery recently for a “Day of the Dead” celebration. I had a piece of chalk in my pocket (as I usually do,) and I drew question marks in the spaces following the dates of death. 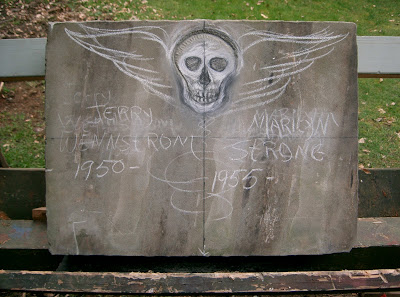 I started with this rectangular slab of particularly hard sandstone and laid out a basic design. 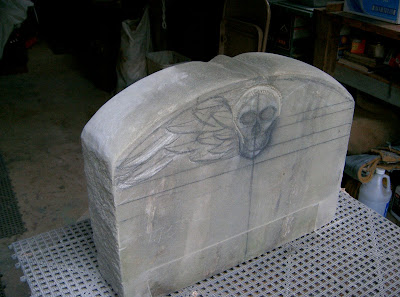 Next, I shaped the top of the stone to give it that classic, somewhat Goth headstone look. I left the natural rough grain of stone along the sides. 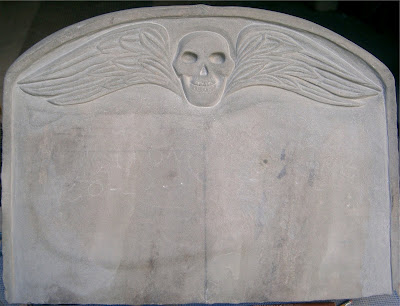 The winged scull was the first image I carved on the face of the stone. 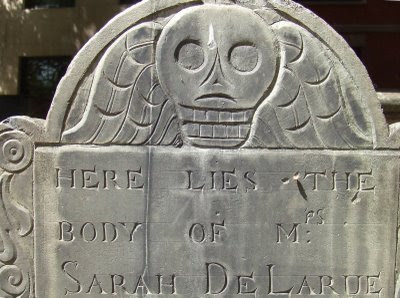 In a variety of forms the winged scull is a classic images on the earliest New England headstones.
When I was researching New England headstones, I found many inadvertently funny sayings. Perhaps it’s the way time and changing attitudes leaves us all generationally-branded and somewhat comical to the eyes of future onlookers.
I found one headstone that said something about “worms a-pray in the cold dark earth.” The implication of worms consuming the body was just too outrageous and funny a line not to it inspired my own: 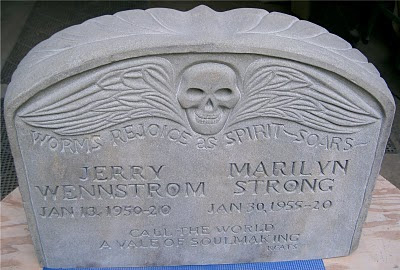 This picture shows a bit of the design on the top of the stone. There is a practical aspect to the design too. I carved the grooves tilting towards the back of the stone so rainwater didn’t run down the face and leave a water mark. 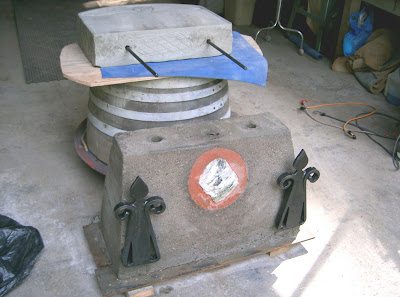 I drilled 2 holes in the bottom of the headstone, set rebar into them and into the holes of the moulded concrete base and cemented it all together. 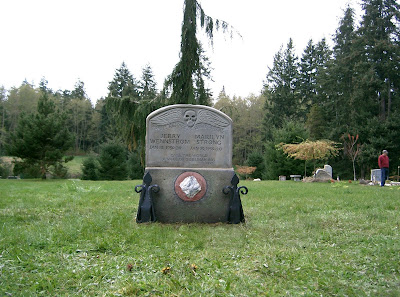 This is the Headstone’s final resting place (and presumably ours too) at the Langley Cemetery.
The base is made of reinforced concrete. Embedded into the concrete are two Fleur-de-lis hand wrought andirons and a marble stone from Iona, Scotland. 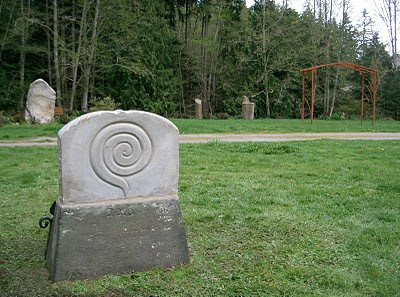 This is the Reverse side of headstone and you might say, our “view.”
A bit of the story of how the headstone came about…
Things just seemed to fall into place for the creation of the headstone. Death, as a potentially liberating experience (metaphoric and literal) has been a theme in my art and life for many years.It is the essential mythos described in my book and Parabola/Sentient Publications documentary film made about my art and life.
My wife Marilyn Strong trained with Jerrigrace Lyons of Final Passages and is currently doing home and family funerals. Marilyn is also president of the Langley Woodmen Cemetery Board here on Whidbey Island. She worked with the Board and Langley City Council to establish a green burial section of the cemetery recently.
There are very few green burial sites in Washington State or in the country, generally. Green Burial is however, an emerging national trend so hopefully we will have a better option than polluting the earth and ground water with enormous amounts of toxins that are used in our current burial process.
We recently purchased one of the new green burial plots at the cemetery so I decided to carve a headstone for the two of us.

I had it in mind to create my own headstone for many years. I was originally inspired by an older Eastern European man I knew in my teens. He was an artist and made his own beautiful headstone out of free-form cement, embedded with glass and ceramic fragments. It wasn’t until years later that I was driving by a large cemetery in the New York area, where I grew up, that I saw his headstone from a distance and discovered the man had died.

I carved ours out of stone, which was an enormously difficult task, not actually knowing what I was doing when I began. The base for the stone is made of formed concrete and includes a special piece of embedded marble. The marble was found on the beach of a sacred site on the isle of Iona, Scotland 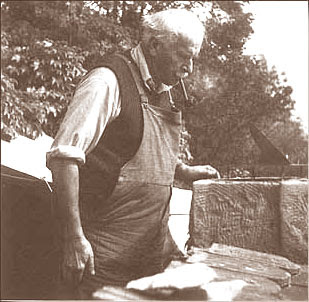 Marilyn, being a fan of C.G. Jung and loving the fact that he carved words and images into stone, took up the hammer and chisel at one point and helped create the very feminine spiral on the back of our stone. The stone was completed on Easter day 2010 — a fitting end-date.

With the help of my friend Van, I installed the headstone on site April 7th.
There is something both mysterious and liberating about giving one’s self, in an embodied way, to facing one’s own ultimate demise – even if only as a symbolic gesture.
Friend and poet Judith Adams happened to be walking with her dogs in the cemetery one day when I was there measuring the ground for placement of the stone and she sent me 2 wonderful poems she wrote that were inspired by the encounter:
*
Jerry’s Gravestone
We keep the dead separate.How can it be otherwise, forthey hob -nob with God in person, under slabs of mossed stone,they have their supine conversations.
You kneel on the spring grassto assess your compact property,your death cot between strangers,a tape measure dangling off center,your face like a boy with a great scheme; and like a boy, not afraid of thebig bad wolf, at easewith the exciting pulse ofthe unknowable, say,of Voldemort or Aslan. Standing there watching is a novelty.We are used to planning the future.Designing a house or flowerbedsis a sensuous occupation,an understandable manifestation. But your own headstone!The carving, the quote, shocking!The illusive inevitabilitydeliciously chilling andthe final province along with the only, true alumna sublime.People will say to one another,“there’s no date of the departed.”They will think,“This man likes to skirt the premises, to rattle the door a bit, to livewith the tremor, the paramount visitationof the dreaded terminus.Only when skeletons dance,is the party is in full swing!
-By Judith Adams

*Grave Stone
You have not finished your grave stone yet,I want to come across it one day on the undisturbed grass.A great surprise as I round the bend with the dogs.The carved skeleton, and chiseled words of a poem,the joint resting place, and the weather would be significant too.
What if every bride and groom undertookthe task to find words at the beginningthat survive the hand grenades of marriage?What if the blushing bride and nervous groomhad worked away for weeks on a death project;an artistic expression of the hyphenated life,
a home for lichen, eternal silence, the use of language sparse and demands an undisguised journey, amid acquisitive romance. The bringing in of a dark stranger with chilling suggestions a robust embrace, a raw pre nuptial, that challenges constancy,
a wonderfully morbid and charming commitment.And I am sure, the use of course sand paper is happily discussed!
- By Judith Adams

*
And here are a couple of radio interviews you can tune into:

"Fire it Up With CJ"
March 8th at 1:00pm PST
http://www.fireitupwithcj.com

*
FIRESIDE CHAT
Interview on YouTube
with the" Zany Mystic"
Posted by handsofalchemy at 12:22 PM No comments: